What is wrong with the status quo? 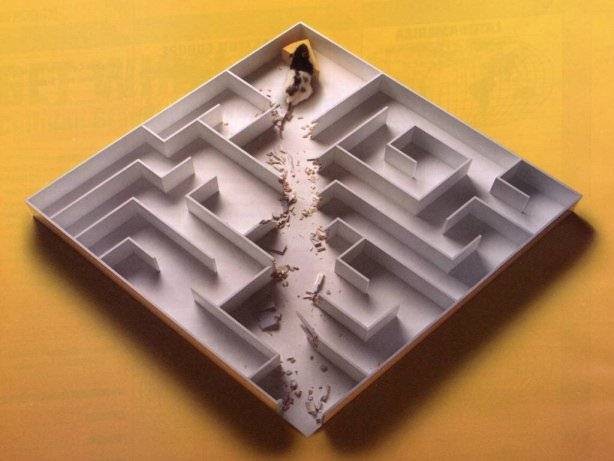 That is a very important question to ask frequently, provided you follow it up with "why do we do it that way?" and "how could this be done more effectively?"

Asking those questions will help you "think outside the box", which can produce profound improvements to your business processes and your life! You don't need to follow the other rats through the standardized maze of status quo.

By developing your own path you can streamline your journey!

You may remember the "Year 2000" software problem. Many computer databases had used two digit years for their year and date fields -- is "00" 1900 or is it 2000? As the year 2000 approached, the news media was predicting international software and financial meltdowns were imminent. A massive world-wide project was undertaken to convert those databases and software to use four digit years.

At the large corporation where I worked, I and several hundred other software developers were fast and furiously trying to discover the scope of the problem. Conventional wisdom was to run text scans and hand-inspect source code and database designs. Horribly inefficient. My own project involved diagnosing impact to 4,060 database objects (DB2 database tables, database views, utilities, and application programs). I asked "how could this be done much more efficiently?".

My answer was to disregard the status quo -- the standardized impact assessment process defined for this project. Instead, I developed an automated "impact finder". It searched database catalogs to automatically diagnose and catalog scope of impact to my 4,060 objects. I diagnosed my impact in 16 hours instead of the 350-700 hours it would have taken using our standardized procedures (about 12 hours to design and build the tool then 4 hours using it to do the diagnosis). We used my tool on another team's project and, in 1-2 hours, found several impacts their weeks of analysis had missed (boy were they disturbed and relieved about that!!).

Once I knew my application had several hundred impacted tables and views, I approached our centralized Database Administration group (DBAs) to do the conversion. They initially quoted 7 hours per object just to do the format redesign. That's several hundred objects x 7 hours each -- thousands of hours of conversion. Unacceptable.

I used high pressure negotiating tactics and the DBAs figured out ways to cut corners so they could reduce their quote to 1-2 hours per object -- still thousands of hours of work. Still unacceptable.

Again I disregarded the status quo. I invested 40 hours in developing a rules based tool that, using the database from my automated impact finder, automatically designed the necessary changes and "cloned" redesigned versions of those tables and views on multiple platforms (multiple test platforms and the production platform). Using my automation, we did the job in 5-10 minutes per object intead of the quoted 1-2 hours each. I literally did a week's work of work every 45-60 minutes I used that tool.

Another 40-60 hours of my prototyping produced a "data migration generator" tool kit that could generate software to unload, copy, reload, and compare data between data stores of different format but identical content. The datastores did NOT have to be the same technology or from the same vendor. That tool also enabled us to accomplish weeks worth of work in just a few hours.

We later used the data migration toolkit on another project to compare and validate the results of a different type of database conversion impacting 80 database tables. In just two days, two of us used that tool to generate about 10,000 lines of diagnostic code then used it to complete the validation. Again, accomplishing several weeks worth of work in just a few days.

My few hours of "out of the box thinking" and action saved that company tens of thousands of labor hours on just my projects alone.

What innovations can you create by questioning the status quo? If you'd like help figuring that out, This email address is being protected from spambots. You need JavaScript enabled to view it..